THE VACCINE WE CAN MAKE Rosh Hashanah 5781 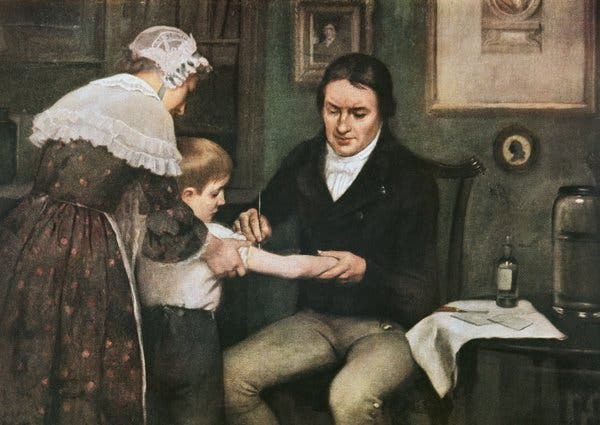 On May 14, 1796 an English physician named Edward Jenner quietly made medical history. Jenner had been waging war against smallpox, a deadly scourge accounting for more than 10% of all deaths in mid-18th century Britain. The good doctor had noticed that milkmaids often contracted an illness known as cowpox; transmitted by cows to people, it resembled smallpox, but was much milder. Most intriguingly, he observed that those who had had cowpox appeared impervious to smallpox. So, on that fateful day in 1796, Jenner induced cowpox by inoculation in a boy named James Phipps. A few days after young James recovered from the milder condition, Jenner exposed him to smallpox not once, but 20 times! Yet Phipps had become immune; he was now protected against infection no matter how many times he was exposed to the deadly disease. Rabbi Yisrael Lipschitz, a younger contemporary of Jenner living in Central Europe, described the doctor in Tiferet Yisrael, his commentary on the Mishnah, as “one of the righteous of the world,” a man whose place in heaven was assured for having saved millions of lives (Tiferet Yisrael, Avot 3:14).

When I was a kid one of the most riveting books I read was Paul de Kruif’s Microbe Hunters. It chronicles the exciting work of scientists like Louis Pasteur, Robert Koch, Emile Roux and others, who discovered the microbes causing diseases such as rabies, anthrax, diphtheria as well as how to make effective vaccines against them. de Kruif’s book fascinated me not only because it read like a great detective novel, but because I was intrigued by the idea that science could tame germs by co-opting them, transforming the very pathogens that caused disease into the means by which a person could be protected from them. This was science, but it seemed magical, a little like alchemy, albeit a kind that really worked.

As we await a breakthrough in the campaign to produce a vaccine against COVID both safe and effective, we have many questions. Has the research become overly politicized? Are we moving too quickly? Will Americans feel confident in a vaccine once available? Yet long before the novel coronavirus, and long before Edward Jenner, Judaism understood the basic premise of vaccination — not in a scientific sense, of course, but a spiritual one. I’ll explain . . .

The Talmud tells a wonderful story about how the rabbis were able to trap the yetzer ha-ra, the evil inclination, and imprison it. They triumphantly believed that they had finally rid the world of immorality and wickedness. The yetzer ha-ra, however, only smiled and said, “You’re happy now, but just wait and see what happens to the world.” At first, the rabbis noticed the improvement: violence dropped precipitously, theft no longer occurred. There was neither envy nor dissension; no one ever argued or became upset.  Indeed, people become so self-satisfied that they stopped striving or yearning for more. People no longer married or wanted children. Even the sages themselves became lazy and put off their study of Torah. It was then that the rabbis reluctantly, but unavoidably, decided to let the yetzer ha-ra go (Babylonian Talmud, Yoma 69b).

At the end of the creation story the Torah tells us, “וַיַּ֤רְא אֱלֹהִים֙ אֶת־כָּל־אֲשֶׁ֣ר עָשָׂ֔ה וְהִנֵּה־ט֖וֹב מְאֹ֑ד — God saw all that He created, and behold it was very good” (Genesis 1:31). Rabbi Shmuel bar Nahmani comments in Midrash that the phrase “very good” refers to both our righteous and evil inclinations. How  can the yetzer ha-ra possibly ever be called “very good”? Scripture answers that were it not for our more self-centered and base desires no one would ever build a house, have children, or engage in commerce, as the biblical book of Ecclesiastes puts it, “All labor and skillful enterprise come from people’s envy of one another . . .” (Ecclesiastes 4:4).

Yes, sexual urges can lead to betrayal, but they can also be conduits to acts of loving intimacy with one’s partner and the miracle of birth; a burning ambition to succeed in one’s professional field may foster a hostile dog-eat-dog work environment, but it could also result in new inventions or breakthroughs for the benefit of humankind; the pursuit of financial gain can fan the flames of greed, or create wealth donated to a world of good causes through the mitzvah of tzedakah.

The Torah offers many examples of how that which is evil can be harnessed and repurposed for good. The Israelites worship a Golden Calf, yet the מי חטאת, the waters of purification the kohanim used to ritually cleanse individuals is made with the ashes of a young female cow. In the book of Numbers God punishes the Israelites’ ingratitude with a plague of biting serpents . . . but when they plead for forgiveness, God tells Moses to put a copper image of a serpent on a pole: as the people gaze at the image they recover from their wounds. The very things that can kill us, can also save us . . . if we are able to harness them.

Those recovering from substance abuse disorders are often able to convert their obsession with self-destructive behaviors into singlemindedness about recovery, healing and health; they become as focused on sobriety as they once were on the substances they abused or the negative behaviors they couldn’t escape, a quality that psychologist William Glasser writes about in his book, Positive Addictions. While I’m not so sure that one should ever pair the words “positive” and “addiction” in the same phrase, I get what he’s trying to say. We can take the same energy devoted to self-destructive ends and recast it to benefit ourselves. The process of teshuvah is not so different than the development of a vaccine; in the laboratory of our souls we can convert the spiritual DNA of what ails us into a source of healing and strength.

The 19th century philosopher, Friedrich Nietzsche, once said, “What does not kill me makes me stronger” Adversity can foster determination; impatience can lead to action; anger can open the door to reconciliation; death reminds us of how precious is life. To live in a fairytale world in which all is sweetness and light would be a costly mistake, for its life’s dirt, its germs, if you will, which stimulate the antibodies that develop our characters and make us better, stronger, and more resilient people.

Said Rabbi Abahu, “מָקוֹם שֶׁבַּעֲלֵי תְשׁוּבָה עוֹמְדִין, צַדִּיקִים גְּמוּרִים אֵינָם עוֹמְדִין — A sinner who repents stands in a place where even the completely righteous cannot stand” (Babylonian Talmud, Berakhot 34b). We all fall down, we miss the mark, we stumble. It would be insane to celebrate failure, but it makes no more sense to wallow in our failures, either. We must do our best to avoid illness — wear a mask, wash your hands, practice physical distancing — but somewhere, sometime you will fall ill with something. The same is true of moral failure and spiritual illness. We can and must do our best to avoid wrongdoing — think gratitude, be humble and positive, remember you are created in God’s image — but somewhere, sometime you will screw up. What then? Will you get up? Will you learn from the experience? The Days of Awe offer us a spiritual laboratory in which introspection and consideration of our failures allow us to develop the vaccines that can convert guilt into forgiveness, and shame into hope. It is so cliche, I know, but without the intense sourness of lemon there would be no lemonade.

When and if there’s a truly safe vaccine for COVID-19, I will be happy to roll up my sleeve. Yet even now I am engaged in developing vaccination serums each and every day of my life as I consider my mistakes, my failures, my flaws and fears, and try to repurpose them to the good. The message of this season is that life is one continuous process of ongoing immunization — for the lessons we learn from failure grow faint with the passage of time, and need to be relearned; just as one needs a new flu shot each year. It is precisely because God loves us that Holy One doesn’t grant us immunity from the consequences of our choices. Though our failures are our own, God gives us the means to make our afflictions the source of our healing. The immunizing qualities of teshuvah, repentance, are never farther away than our next thought.