WHERE THE NIGHT IS THE DAY: WHAT THE NINTH PLAGUE CAN TEACH US 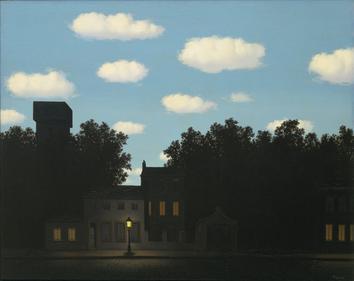 In the summer of 2001, my family rented a cottage in southern Nova Scotia.  The nearest town was Yarmouth, 30 minutes away by car; with a population of 7,000 though, it wasn’t exactly a bustling metropolis.  This was a quiet spot, one in which you could really hear the silence.  It is almost impossible to imagine such quiet in Jacksonville. We hear crickets, the noise of distant sirens or cars, or the far-away whistle of freight trains. Living less than a mile from the Buckman Bridge, no matter the time of day or night I can hear the far away hum of traffic crossing the Saint Johns River. In that Nova Scotia cottage, however, the silence was so absolute you could hear a car several miles away. It was both wonderful and unsettling.

But what was truly unnerving was the quality of the nighttime. Pitch black, the darkness was so thick that it felt like a blindfold. Without moon or stars on a cloudy, I couldn’t see more than two or three feet into the impenetrable night. I vividly remember grilling salmon on our hibachi on the back porch, uneasily peering into the darkness, half expecting Freddy Krueger, Chucky, Jason, and Dracula to all leap out and suddenly pounce. What a relief it was when I finished cooking and hurried inside to the welcome sight of the lights!

Night has always been a fearful time for human beings because it is hardwired into our amygdala, the part of the brain responsible for our most basic emotions. It is this part of the brain that triggers our fight-or-flight response.  We can well imagine the terrors of the night, for our distant ancestors in the dark forests of prehistory were forced to contend with unfamiliar and sometimes terrifying noises without seeing them. The midrash gives expression to this primitive fear in a story told about Adam’s terror at experiencing night for the very first time. At the conclusion of the following night when Shabbat ended, God showed Adam how to create fire by striking two stones together and using the sparks to kindle a flame. According to the legend, it is this which gave rise to havdalah, the ceremony concluding Shabbat with the lighting of a candle and the recitation of a special berakhah (Babylonian Talmud, Pesahim 54a).

In Exodus the ninth plague inflicted upon the Egyptians is darkness.  According to the Torah, this particular form of darkness was infinitely more terrifying than that of a normal night: “ וַיֹּ֨אמֶר ה’ אֶל־מֹשֶׁ֗ה נְטֵ֤ה יָֽדְךָ֙ עַל־הַשָּׁמַ֔יִם וִ֥יהִי חֹ֖שֶׁךְ עַל־אֶ֣רֶץ מִצְרָ֑יִם וְיָמֵ֖שׁ חֹֽשֶׁךְ . . . לֹֽא־רָא֞וּ אִ֣ישׁ אֶת־אָחִ֗יו וְלֹא־קָ֛מוּ אִ֥ישׁ מִתַּחְתָּ֖יו שְׁלֹ֣שֶׁת יָמִ֑ים. . . — And God said to Moses, stretch forth your hand toward heaven, and darkness shall come upon the land of Egypt, thick enough to be felt” (Exodus 10:21, 23). The Hebrew word וְיָמֵ֖שׁ conveys a sense that the darkness had a material reality to it; more than the absence of light, it possessed bulk and carried a weight of its own. Not only was it so dark that the Egyptians could not see each other, but the dark imprisoned them, making it impossible for them even to leave their homes. The medieval commentator Rashi takes the Torah’s wording literally. It wasn’t just that the Egyptians couldn’t leave their homes, they also were paralyzed by the darkness, frozen into place. Those who were sitting could not rise; those who were standing could not sit.

But it gets weirder . . . while the Egyptians were surrounded by darkness as thick as bricks, the Torah tells us, “וּֽלְכָל־בְּנֵ֧י יִשְׂרָאֵ֛ל הָ֥יָה א֖וֹר בְּמֽוֹשְׁבֹתָֽם — But among the Israelites there was light in their dwelling places.” This is hardly the first time a plague affected only the Egyptians while sparing the Israelites, yet it is much easier to envision a scenario in which hail or locusts affect one locale, but not another. After all, here in Florida you can watch the rain pour down on your front yard while your backyard stays dry. But the thought that light could exist for one person, yet another individual nearby might not be able to see it strains the limits of credulity and violates the laws of physics.

Unless something else is going on here. There is an interesting debate in Shemot Rabbah, a rabbinic commentary on the book of Exodus, between Rabbi Nehemiah and Rabbi Yehudah regarding the origin of this darkness. According to the former, God raised the darkness from Gehinom, the netherworld, a place of punishment for the wicked. Accordingly, because it came from a place of punishment it possessed no power over the innocent. Like an individual with the antibodies to a particular bacteria, the darkness could exercise dominion only over those vulnerable to its effects.  Rabbi Yehudah, on the other hand, insisted that the darkness was imposed from on high, for light and darkness in the world emanate from the heavens (Shemot Rabbah 14:2).

So who was right, Rabbi Nehemiah or Rabbi Yehudah? Well, in these kinds of rabbinic arguments, there is no winner; you’re welcome to choose whichever view you like better. But there is a powerful postscript to this disagreement. Seventeen centuries after these two sages lived, Rabbi Levi Yitzhak of Berditchev, went on the record siding with Rabbi Yehudah, who claimed that the darkness came from heaven. Yet he took the matter one step farther, insisting that the light enjoyed by the Israelites and the darkness that terrified the Egyptians were actually one and the same. In other words, as Bruce Springsteen once sang, “They were blinded by the light” (NB: Springsteen composed and sang the song in 1973, three years before Manfred Mann made it into a worldwide hit).

The Berditchever meets the Boss

The Berditchever Rebbe does not understand light and darkness in physical, but rather spiritual and emotional terms. To the Israelites, in God’s supernal light they saw a future of redemption from bondage, the approaching moment of their freedom. They glimpsed the possibility of revelation at Sinai and entry into a covenantal relationship with the Eternal. The Egyptians saw this as well, but for them it portended disaster, the loss of their human chattel, defeat at the hands of the God of their lowly slaves. They saw their own impotence and could not perceive anything beyond their own victimhood. God’s light blinded them, even as it gave insight and hope to the people Israel.

This is a lesson of profound importance.  All of us, at one time or another, find ourselves in bondage, emotional, spiritual, or physical. The facts of our circumstances are always the facts, but what we do with them creates our own self-perception of reality. In the face of challenge, we can choose to seek the light or wallow in the darkness. I say this not as a pollyanna, but as a person who has had to wrestle at times with disappointing realities and difficult situations.

Were you ever fired from a job, or maybe put all your hopes in getting a promotion that did not materialize? Did a significant other ever break up with you or have you been through a divorce? Have you ever experienced estrangement from a family member, a friend, or a colleague?

Some years ago, I disagreed with an individual over a matter of principle with a member of a past congregation. Not only was it uncomfortable for us to speak with one another, but other members of the community began to be drawn into the disagreement. My initial reactions were the same as many people in similar circumstances.  Frequently our default position in such situations is to feel isolated, helpless, or victimized. Upon further reflection, I felt angry and combative. I was right and he was wrong, and therefore I had to win the argument, which automatically meant he had to lose. Yet to practice the kind of avoidance that I often see at social functions when two people are uncomfortable with another offered no solution, only permanent alienation. As for going to the mattresses, to borrow the language of the Godfather, it would have resulted in only deepening the damage.

It was then that I realized that here was an opportunity — not happy and carefree by any means, but nevertheless a real opportunity. I could choose to grow from the experience, and forego my negativism — after all, my isolation and anger were self-generated, no one forced me to feel this way. So I chose to pave a road around the mountain rather than through it; I maintained my principles, but saw a chance to become a better listener and leader. At the end of the day I was able to engender better communication and foster greater respect by choosing to see the darkness as light.

In the Exodus story the last plagues to precede Israel’s redemption all involve darkness. The locusts are so numerous as to blot out the sun in the sky in plague #8; the darkness of #9 possesses an intensity we can hardly fathom. The final plague involving the death of the Egyptian first-born deliberately occurs at midnight, while the actual Exodus begins under cover of darkness. We can be Egyptians or Israelites; the choice is ours. We can view the night as the path leading to dawn or sink into the thick gloom that keeps us from being able to see anything, even ourselves. Life is often fractured, reality is marked by fissures and cracks. Yet as the singer Leonard Cohen once wrote, “There is a crack in everything; that’s how the light gets in” (Listen to Leonard Cohen).  There is always light in the darkness, but only for those willing to open their eyes.