MEET THE MAN WHO SAVED YOUR LIFE: A Yizkor sermon for Shemini Atzeret 5778

The Hebrew word Yizkor means “remember”.  It begins each of the individual prayers we recite asking God to remember our loved ones in exchange for our pledges of tzedakah or the promise of righteous acts.  In truth we are not asking an omniscient God to remember; after all, can we truly imagine a “forgetful” God?  Rather, we are asking God to help us remember, because human frailty sometimes occasions forgetfulness on our part.  Through acts of tzedakah and the performance of ma’asim tovim, good deeds, we add substance to our memories of family and friends, linking our recollections of them to tangible and positive acts of righteousness.

Yet this morning I would like us to take the time to remember an individual that none of us ever met.  It is unlikely you’ll recognize his name or be able to identify his single greatest achievement.  And while I believe he was an intelligent individual who succeeded in his chosen field, his presence in today’s sermon is due to a single 5-minute period in his life.

So where were you on September 26th in 1983?  A check of my 200-year calendar revealed that it was a Monday during the intermediate days of Sukkot.  I was a junior at Vassar College; and I don’t have any recollection of what I was doing that day . . . other than the fact that I was likely in a classroom somewhere on campus in Poughkeepsie, New York.  Only a few weeks earlier, Korean Airlines Flight 007 had been shot down by a Soviet jet with all 269 passengers killed.  A civil war raged in Angola, while Lebanon had already disintegrated into multiple warring factions.  The attack on the U.S. Marines compound in Beirut was still almost a month away.  Ronald Reagan was our President, while the Phillies and the Dodgers, as well as the Orioles and the White Sox, were in the final week of the regular season, getting to ready to battle one another for their respective league championships.

September 26, 1983 was probably an ordinary day for most of us — sufficiently mundane to pass into history unnoticed, relegated to the place beyond memory where all distant yesterdays melt into undifferentiated oneness.

But that day could easily have been the last of your life and mine.  Indeed, it almost was the last day of the human race.  Every child born after that date, and every person who lived to wake up the morning of September 27th, 1983 owes a debt to gratitude to a person they probably never heard of because of a momentous decision they never knew he made.

Petrov as a young officer

Stanislav Petrov was his name, and he died quietly last month at the age of 77.  On that morning back in 1983, however, he was a 44-year old lieutenant colonel in the Soviet Air Defense Forces. Stationed at Serpukhov-15, the secret command center outside Moscow where the Soviet military monitored its early-warning satellites over the United States, he was just a few hours into his shift when sirens went off.  What was then state-of-the-art computer equipment warned that five Minuteman intercontinental ballistic missiles had been launched from an American base and where heading straight toward the Soviet Union.

Keep in mind that the autumn of 1983 was a very tense moment in the Cold War.  The Soviets were wary that their downing of KAL flight 007 would be avenged in some way; President Reagan had rejected calls for freezing the arms race, and had called the Soviet Union an “evil empire.” The Kremlin’s leader, Yuri V. Andropov, was obsessed by fears of an imminent attack American attack.

Colonel Petrov occupied a critical spot in the decision-making chain. His was the responsibility to authenticate  the report of incoming missiles to the Soviet military’s senior staff, who would then consult with Mr. Andropov on launching a retaliatory attack.  As the computer systems in front of him changed their alert status from “launch” to “missile strike,” and affirmed the accuracy of the satellite transmissions, Colonel Petrov had to figure out what to do.  The tracking devices indicated that detonation would occur in 25 minutes . . . each minute spent without taking action decreased the possibility of launching a successful retaliatory strike against the United States.

After five nerve-racking minutes — electronic maps and screens were flashing as he held a phone in one hand and an intercom in the other, trying to absorb streams of incoming information — Colonel Petrov decided that the launch reports were probably a false alarm.  As he later explained, it was a gut decision, at best a “50-50” guess, based on his distrust of the early-warning system and a hunch that if the U.S. had opted to launch a first-strike it would have fired scores upon scores of missiles rather than just five.

He was right . . . and here we are today.  The false alarm was the result of a Soviet satellite mistaking the sun’s reflection off the tops of clouds for a missile launch. The computer program that was supposed to filter out such information had to be rewritten.
Petrov was never given a medal or a commendation for his willingness to trust his own instincts rather than a computer.  Instead, he received a reprimand for not having recorded in his logbook all of the data that streamed past him in those unforgettable few moments.  It didn’t matter that he had a phone in one hand and the intercom in the other, so he didn’t have a third hand to log data. 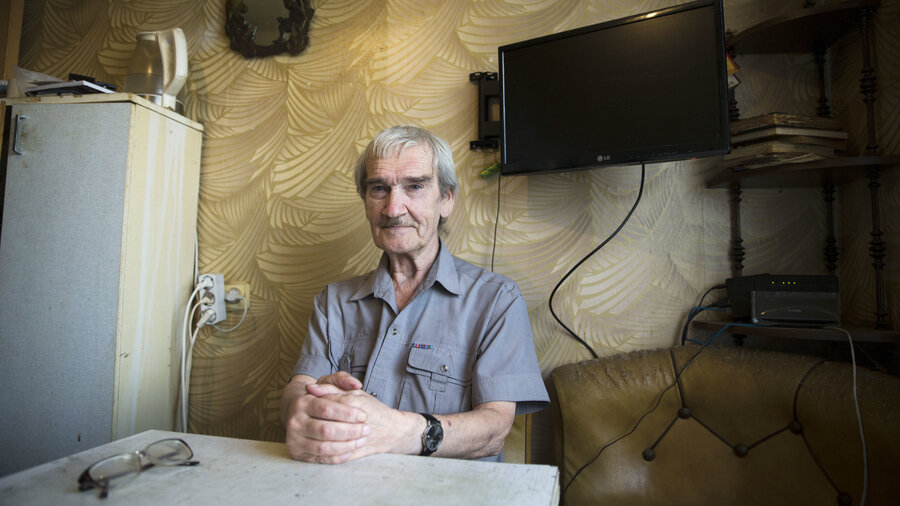 Petrov in his final years

Stanislav Petrov never boasted about his decision to trust his gut rather than the computer screen in front of him.  He left the military a year later, and faded into obscurity — at one point he was reduced to growing potatoes to feed himself.  But for the publication of a 1998 memoir by General Yuriy Votintsev, the retired commander of Soviet missile defense, his role in averting nuclear Armageddon would never have been known.  “I was just at the right place at the right time,” he said in a later interview.

Was it God who put Stanislav Petrov in that control room on September 26th, 1983?  If he had called in sick and someone less distrustful of computers had taken his place, would we be here today?  He was just doing his job — so he claimed — but what acknowledgment do we owe an individual who, on a hunch, ignored his computer and thereby avoided what surely would have been the start of World War III?  What does it mean in the larger sense to be at the right place at the right time?  And how does one know that he or she is, unless granted the gift of 20/20 hindsight?

We learn in the Mishnah of Avot in the name of Ben Azzai, “אַל תְּהִי בָז לְכָל אָדָם, וְאַל תְּהִי מַפְלִיג לְכָל דָּבָר, שֶׁאֵין לְךָ אָדָם שֶׁאֵין לוֹ שָׁעָה וְאֵין לְךָ דָבָר שֶׁאֵין לוֹ מָקוֹם — Do not dismiss any person; do not underrate the importance of any thing — for there is no person who does not have his hour, and there is no thing without its place under the sun” (Avot 4:3).

Is there an American Stanislav Petrov on watch deep in the nuclear bunker of Cheyenne Mountain in Wyoming?  More disturbing, is there a Petrov-like figure waiting in the wings somewhere in North Korea’s top secret nuclear headquarter?   Are we dancing on the edge of a volcano?

There is no person without his hour.  One need not be a hero to save the world; or to put it differently, being heroic doesn’t necessarily require anything but a willingness to do one’s job . . . and accept responsibility for the call one makes.  The drama of Stanislav Petrov’s story is not why he deserves to be remembered, but because he was as ordinary as the effect of his decision was extraordinary.  In going to work one day, he just happened to save the world.

Which is precisely the point.  The Apter Rebbe, the great-grandfather of the theologian, Abraham Joshua Heschel, once observed:  “A person does not choose the form in which he wishes to perform service for God, but rather perform it in any way opportunity affords.  He should be like a vessel into which anything may be poured — wine, milk, or water” (Menorah Ha-Tehorah, p. 80).  Whether future generations will remember our deeds or not, God calls each of us to change our world in some way by being at the right place at the right time . . . even though we may be clueless about the what, where or when.  In the end your small acts of wisdom or compassion may be of equal or greater value to the grand gestures you consider to be your most enduring legacy.

Edward Markham, the American poet, once wrote, “Choices are the hinges of destiny.”  During Yizkor, let us consider how the choices of our loved ones changed our destinies, whether for good, for ill, or perhaps both.  Everything we do in life potentially matters . . . even the decision to remember some people and forget others.  I will remember Stanislav Petrov — not just because I’m happy that I wasn’t obliterated in a nuclear holocaust that September morning 34 years ago, but because he has quietly reminded me that I may make a lasting change in just a few minutes of living, and in so doing, alter the course of another human being’s destiny.  For if every person is a planet in the galaxy of humanity, then, maybe each of us may save a world and assure our place in eternity.

One response to “MEET THE MAN WHO SAVED YOUR LIFE: A Yizkor sermon for Shemini Atzeret 5778”